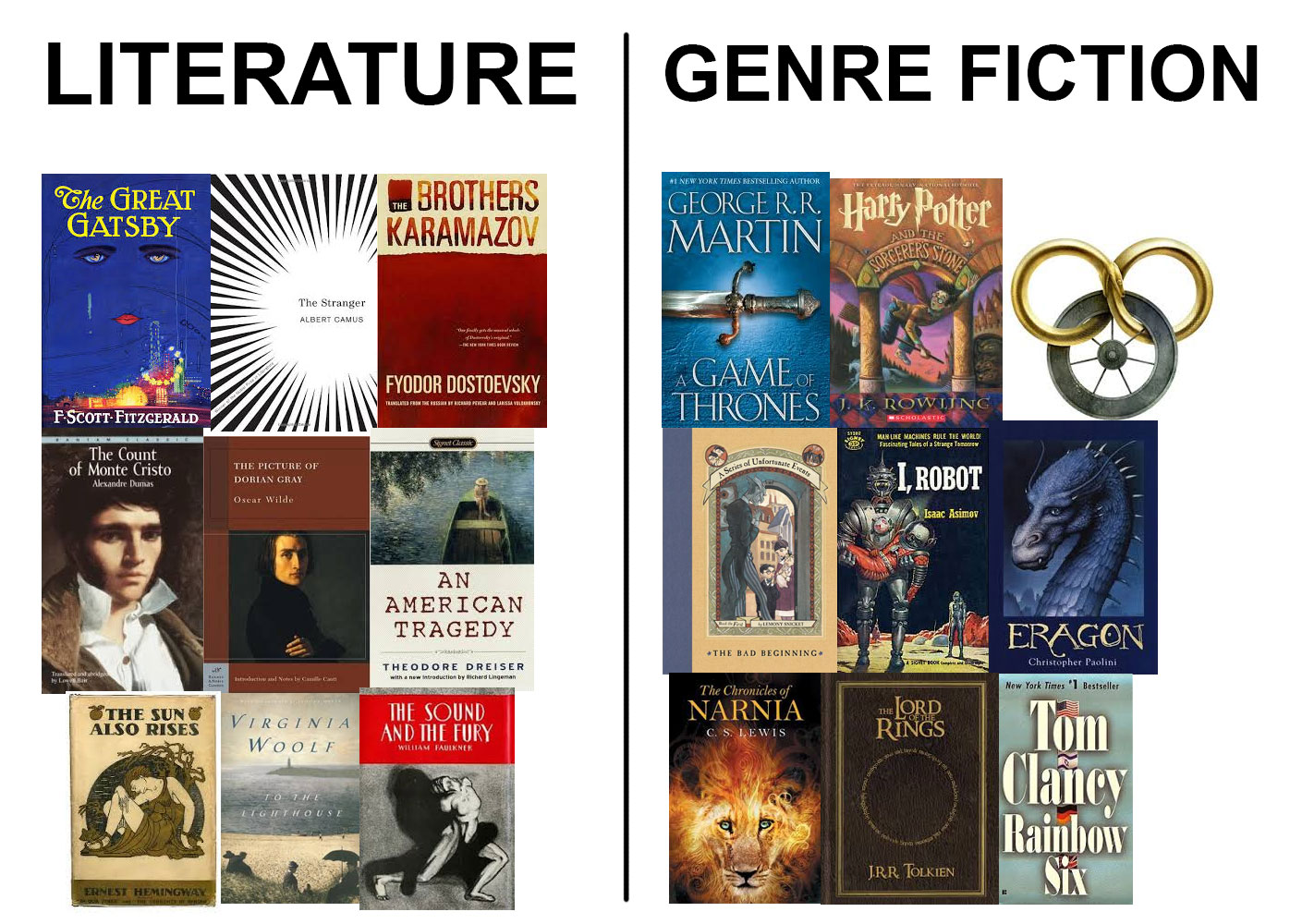 “I looked for stories with narrative ambition, complex characters, and imaginative use of language, the familiar staples of good storytelling. I prefer, on the whole, stories that present readers with situations requiring resolution, inviting moral choice, finding ambiguity in life experiences we are tempted to simplify…. [Stories that] explore classic themes embedded in unexpected or topical contexts. They involve characters who must choose between integrity of the heart and integrity of conscience. The stakes for the protagonist in each story are substantial, and the most honorable outcomes aren’t always the most welcome.”  C. Michael Curtis, Fiction Editor for The Atlantic

A lot of times I find myself at readings or at conferences where the writers feel the necessity to excuse themselves either for writing genre-fiction or else for thinking of some of those so-called genre novels as literary.  Sometimes, these writers are defiant and angry. They want to defend (and rightly so!) the challenge and scope and beauty of their work, and resent having to contend with the stereotype that goes along with a label like “historical romance” or “cozy mystery.”  I have friends who write in this genre and they are brilliant, maybe far more brilliant than some of my other friends who only write literary.

First, sort of out of context, here is a factoid for you:

Ezra Pound loved mystery novels and tried his hand at writing them a couple of times.  Because I know of no famed Ezra Pound mystery novel, I assume that he must have failed at the task.  He was much better at poetry, I guess.

Then, it seems to me that people misuse the word “literary” as a synonym for pretty writing.  Here, too, I think the misunderstanding stems from the fact that people just don’t understand what makes this genre a genre.  Do you know that there are many, many works of literary fiction that purposely, deliberately butcher language, use it either in pathetically minimalist and simplistic ways, or else cut it up and throw it around in the guise of different forms, (for instance, a telephone interview, or else part of a script for a play — see Moby Dick for examples), or else go on and on and on and on for pages and pages, sustaining the sentence on commas, semi-colons, colons, dashes, ellipses…. ?No. Literary does NOT mean pretty prose.

Also, by some snobs, literary fiction is used as a synonym for “good fiction.”  No wonder the genre writers get defensive.  You will all have heard, “sure she published three books, but they were genre, not literary.”  Well, mmhmm. If we could agree on a clear definition for literary fiction, I think that we would also have to agree that there is a lot of really bad literary fiction out there.

Here is another misuse of the term “literary fiction” that I blame on agents and publishers.  It’s a literary novel IF it has the following words in the blurb “UNCOVERS A FAMILY SECRET” or “A NOVEL OF GRIEF AND SURVIVAL” or the blessed words “COMING OF AGE”  Those novels with vague, hazy plots are automatically categorized as “literary” simply because there is no other place to put them… unless they have a happy ending and involve women protagonists, in which case they become the somewhat diminishing WOMEN’S FICTION category.  Mmmm.  This too comes from basically failing to understand what, exactly, literary fiction is.

So, I thought I’d take a stab at a definition, since I’m working on a book hat talks about all the elusive distinction between the fiction genres — inspired by the many run ins with students and writers (published writers!) of fiction who showed a fundamental lack of understanding of many of the styles and genres they were reading, publishing, and, yeah, sorry to say, even teaching.

So, before I turn too much into The Professor, you know the one who, during a revolution writes letters to the dictator advising him that he should make his underlings read Confucius  (Ezra Pound did that)– before I turn too pedantic, in other words, let me try to define literary fiction. (I wanted to use the word disambiguation that I learned from reading Wikipedia, but, alas, I could not fit it in a sentence. )

What distinguishes this genre — and it is a genre — from all the others, it is that its purpose is to challenge or confront the reader on at least one, if not multiple levels of perceptions. Literary fiction may attack a reader’s perception of language by using the kind of complexity for which Jorge Louis Borges and James Joyce became famous for or by stripping it of all its fluff to test its bare-bone efficacy as the minimalists did for decades, but it might also challenge our sense of what is right and wrong, as Albert Camus’ The Stranger did for generations of readers, or  it may question our certainty about what we understand as reality as did Garcia Marques’ One Hundred Years of Solitude and all the incarnations of magical realism that the South American literary movement engendered. It may challenge our certainty of the benevolent nature of communication technology as, more recently Dave Eggers did with The Circle, and Aldous Huxley with Brave New World, or might shine a mirror on our own souls and ask us to re-evaluate our own moral compass like with Updike and Chekov’s work, and it may ask us to consider whether or not we may be complicit in a crime against humanity, like Orwell’s celebrated 1984, or against an entire race, like Richard Wright’s Invisible Man.  It may also re-evaluate our perception of evil, as Cormac McCarthy’s novels have done now for some decades.

So, the quote that started this blog: it comes from a long time editor of The Atlantic, and I think it’s as good a definition of literary fiction as might be conceived, except that it seems to exclude (without intending to, I’m sure) those stories that aren’t told in traditional story-telling forms, stories that are undoubtedly literary because, among other things, they also challenge our perception of what a story should be.

With this definition in mind of literary fiction as a type of fiction that challenges perceptions, you may see that there are novels and stories labeled under some genre or other that rightly deserve to be considered literary.  For me, one of these is the Hunger Games, but there are many more mislabeled works.  Margaret Atwood’s The Handmaid’s Tale, for instance, was launched onto the market as science fiction, but it didn’t seem right to throw Atwood’s dystopian vision of a society in which the dogmatic religious views of a few destroy American democracy for everyone together with stories about epic battles against intelligent bugs populating a distant planet. Thus we began the painful permutations of labels like Speculative Fiction, Innovative Fiction, and all those other finicky variations that wanted to both honor the literary spirit of the novel but separate it from the traditional snobs that could not conceive of allowing dystopia into a definition of literary.

So, to those editors, publishers and marketers who label all those coming of age stories as “literary” I want to say, are you sure?  Because it seems to me that maybe at some time in the past it felt challenging to our sense of morals to read about people’s inner rebellions, divorces, and personal losses, but is it still the case? You can only challenge a perception so many times before it becomes old news.  Thus, now that we know so much about quantum physics and time travel, a novel about such distortion cannot be considered literary unless it challenges something else besides our traditional notion of time.

And now that you know everything there is to know about the literary genre, GO FORTH AND WRITE! (And change some perceptions while you’re at it).