In formal venues, I have presented and written about the necessity of research in fiction, the caveats, the immersion process, the repercussions of altering history or fact, the responsibility of writers to glean detail in the most absolute accuracy. But for this post, I want to talk about the fun part of interacting with facts (or people) while writing fiction.  In particular, I want to talk about composite characters, the process of creating a character from fantasy and imagination and then re-imagining them again after comparing them to real life people.

This is what happens: we start to imagine characters that are inspired by real life things, a photo of someone, a fact in history, a relative, etc. But then that character becomes completely imaginative as we begin to work them into our story. Then after a while when we’re comfortable with those characters we begin casting real life people in their roles — who hasn’t done that? And then other magic happens.

For example: my character Gilgamesh was inspired by the mythical Gilgamesh, but after a while he became my Gilgamesh in ways that wasn’t reflected in any other literature I know.  I had imagined his personality, his quirks, his facial expressions, his sense of humor, his peeves, etc. and they were unique to him.

But, like many writers, I got inspired to add onto my original characterization by the most bizarre and unexpected influences.  For instance, One photo by Stabbing Westward’s lead vocalist Christopher Hall inspired a scene in which Gilgamesh, to startle his enemies during a semi-diplomatic encounter, wears ghastly white makeup, kohl eyeliner, and henna tattoos all over his face.

In my mind, there is no equal to my Gilgamesh in real life, but his descriptions as having both a pretty face, (a hurt-boy look), and a body so muscular that even just looking at him enemies get scared was somewhat inspired by actor Tom Hardy, especially in his role as rogue boxer in The Warrior.

Tom Hardy also provided inspiration for Gilgamesh’s voice in my story, something that I describe like the hiss of a wild desert lynx.  Tom Hardy would probably disagree that his voice sounds like a hissing lynx, but it was the smooth, feral hiss (I can’t describe it in any other way) in some of his performances that made me think about Gilgamesh’s voice, and now it’s Gilgamesh that sounds like a feline, in my mind, regardless of what Tom Hardy sounds like.

This composite exchange was even more fun when I composed Gilgamesh’s antagonist, a woman whose marriage to Gilgamesh and later her betrayal of him invites (in my novel, anyway) scribes, jealous women, and misogynisitic priests to cast her in the role of the dark goddess and to create and perpetrate such a myth about her. Since she is presumedly the prototype for the Inanna/Ishtar idea, the seductive, promiscuous, wrathful goddess who condemns her own lover to hell, and who later becomes the Lilith of Biblical literature, I knew when I first started imagining her that she couldn’t be beautiful in the classic sense.

She would have something scary about her, albeit attractive, in some ways, even irresistible. As the dark seductress that everyone believes her to be, she had to have allure, but — she had to have something that made people afraid of her, a stance, an aggressive self-assuredness, but also a special kind of look that might be considered glamorous and beautiful but also somewhat off-putting.

When I first began to imagine her, she didn’t really have much of a face (unlike Gilgamesh, who I can see so clearly I could draw a police composite if I had to – and no, he doesn’t really look like Tom Hardy, though he’s told me he doesn’t mind the comparison).  I had her personality tight, and more importantly, I had a certain spirit of her that came through in her voice first.  The Xani chapters of my novel were a case of paranormal dictation in a sense: I heard her speaking, and I couldn’t type fast enough to keep up with her story.  But I think that a prototype for her character began to form in my mind in the late 1990’s (or was it early 00’s?), in Miami, where, to my great fortune, I attended a museum installation of some of the works of Shirin Neshat.

One particular installation titled Turbulent haunted me for years thereafter. The installation was projected on two opposite walls: the first involved a man singing a beautiful and quite melodious Iranian song to an enthusiastic audience, while on the other wall, a mysterious veiled woman gave her back to an identical, but entirely empty auditorium and waited in silence while the man performed.  When the man finished his song the audience applauded, but just as the applauding crested, the woman in the dark empty auditorium began her song, while the man, turning his back to the audience, listened with a rapt and also befuddled expression.  (In YouTube, the installation has been modified to fit on a single screen.)

And there began the haunting first appearance of the character in my mind. The voice, the singing, told me a story, and for years and years that voice simply wouldn’t leave me.

The veiled woman in the installation is Sussan Deyhim.  At the time, I didn’t know the Iranian singer, nor had any inclination who she might have been. All I knew is that the moment the woman began to sing, her voice got inside me, demanding with its pervasive power that I pay attention to it with everything I had in me to give her, my mind, my heart, my everything.  Her voice wasn’t pretty; it wasn’t gentle and inviting: it was confrontational, angry at times, at times tired, exhausted even, full of pain and longing, and it clawed and clawed inside me, now urgent, now calm, now desperate, now alien and removed.  It was difficult not to weep. I simply had never heard anything like her, never, ever.  I had never heard (and still haven’t heard) anyone do with a voice what she does with hers.

I think I might have watched that same installation loop around at least four times. I couldn’t leave. The man’s performance was beautiful, too, but ultimately not nearly as memorable.  The woman’s however, was the sort that revolutionized something inside me.  It took me years to re-trace the installation afterwards, and to find out who the mysterious Iranian singer was.  I have listened to other compositions by Sussan Deyhim and am simply amazed by what she can do with her voice: her range is unimaginable, and her compositions often contain a level of dissonance and contrariness that makes her singing unlike any other woman’s singing that I know.

So this woman’s voice was the voice of Xani.  This is what it sounds like: (from Sussan Deyhim’s Turbulent)

As for what Xani looked like, I had some idea in my head that she was dark, and somewhat hard looking, but also long-limbed, graceful, and self-assured.  One day, taken by the madness, I began to Google Image every Iranian, Arabian, Iraqui, Pakistani, and Hindu actress that I could find, scanning for faces of Xani.  I must have looked at hundreds of images, sometimes starting over and looking again.

I found Xani affirmatively, without any reconsideration, in the model Lakshmi Menon.  These are the pictures that inspired some of the descriptions of Xani’s beauty, and also, that grandness and unusual facial structure that might have made some men feel intimidated by her.

In particular, the following image is what cemented it for me: the woman is beautiful beyond a doubt, but her features are unusual, sharp, assertive, almost threatening.  Her costume is exactly the type of costume that high priestesses of Elam and Sumer would have been wearing, with high headdresses and lots of golds and bangles.  She would have appeared otherworldly, goddess-like, even frightening.

.  She was strange looking.  High forehead, strong chin, a large, lushious mouth, and dark, dark eyes, shadowed eyes, eyes hooded low and circled with kohl and with something else, exhaustion perhaps, eyes that shone with what he could only describe to himself as some kind of wild, desperate cunning, like a cornered cat trying to outsmart its threat.  She was not beautiful. Althesame, he couldn’t stop looking at her.  He couldn’t stop admiring the strangeness of her.

Her breasts lifted and fell under her armor plate as she sighed.  But her svelte, sinewy frame disturbed him: she had none of the softness and roundness of the kind of women he liked. In fact, her weapons rendered her menacing.

He immediately amended his first impression: there was beauty in her, he could see it, but it was the kind of beauty one had to want to see, had to pluck it out of the hardness of her angles, a beauty that camouflaged itself in sharp lines and jutting bones. Like the Mother.  Like the painted shabatus of some tribes.  (from The Faithful Son) 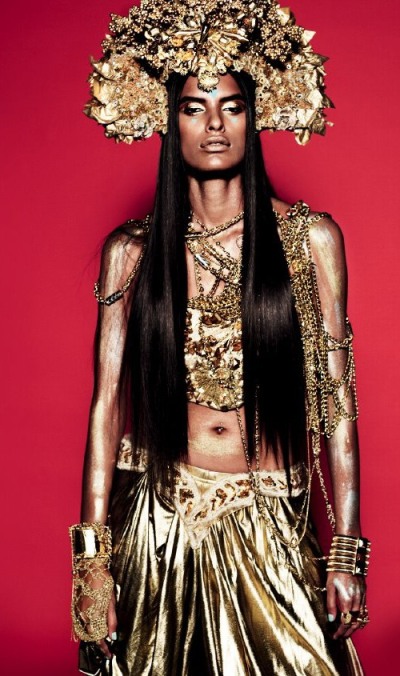 So, the cycle of the composition of these characters was intercourse between reality and imagination: Gilgamesh started as a historical character who sparked my imagination and became my fantasy Gilgamesh, then, slowly got morphed into something even more complex as I began to get influenced by other real life people.  Xani began as the voice of a singer I didn’t at the time know, then she became a narrative voice in my head, an idea, and then, when I had firmed up her persona, I began to look for real life people who would look like her, and that in turn inspired some of my descriptions of her as well as helped me to visualize her in specific situations.

This is all the fun of fiction. How do you come up with your characters?