Ever since I was a child and I heard that human beings use only 10% of their brain’s capacity (since proven to be a myth) I wanted to have a job where I would get to study the brain all day long.

I didn’t become a neuroscientist — in part because in those days of “hands-off” colleges nobody bothered to tell me that’s what I had to do in order to study the brain; heck nobody even bothered to ask me. Instead I became a fiction writer, which in my opinion, it’s the same thing.

Ok, maybe not the same thing, but it’s similar.  Fiction writers get to study the mind, if not the brain: we got to look at human behavior and motivation of said behavior very closely. So maybe we are more like psychologists than neuroscientists, but all the same I am interested in brain science.

Not just because I want to know why 90% of our brain is on permanent vacation, and how do I get that gig, but because I am the type of writer that alternates frequently between being possessed by the muse of literature, hearing voices in my head and that sort of thing, and having days when the silence in my head is speaking very loudly to me, basically saying the same thing: Laura, quit writing. You’ll never make it. (Whatever that means).

If you ask writers you’ll get more or less two basic perspectives on the reasons for writers’ flow and writers’ block.

1. There is the camp of writers that I like to call “The Behaviorists” who believe that writing and not writing is nothing mystical or complicated.  You simply do it.  Writers’ block is another way of saying, “I don’t feel like it,” which, if you want to call yourself a writer, you should be ashamed to say to yourself.  Writing and not writing is a matter of establishing habits and keeping to those habits, regardless of the circumstances.

There is a wealth of literature on the behaviorists, books with titles like “Overcoming Writers’ Block” and “The Habit of Writing” and so forth.  Most writers, I suspect, subscribe to this point of view.  When asked about writers’ block most writers, with different degrees of compassion and understanding for the condition, will nonetheless surmise that the block is temporary and that all it takes is for an extra effort of will power to overcome the stasis, or a new take on the old subject: basically, the writer is in control and the writer decides when and how to get in and out of block, even though the writer may not be aware that he/she is controlling said behavior.  The plethora of advice given by the behaviorists centers on the simple premise that behavior can be modified/altered through habit or routine.

2. Alternatively, there is another group of thinking in the writers’ community. I will call them the Daemonicists because of a very inspiring free book by writer Matt Cardin titled A Course in Daemonic Creativity which, in my opinion, sets the pace in defining this way of thinking about writing creatively.  The word “daemonicist” is derived from the concept of a “daemon” or muse (not to be confused with demons).

According to the Daemonicists, creative writing lies in that grey area between the subconscious mind as exemplified by meditation, dreaming and lucid dreaming, altered states, and collective consciousness if you’re a Jungian etc. and the conscious mind exemplified by observation, memory, synthesis, analysis, etc.

To oversimplify what is a fascinating subject, Daemonicists believe in a muse.  The concept isn’t new and dates back to at least the hey day of Ancient Greece (let’s say 500 BC?) and probably was around before then.  The difference between the contemporary daemonicists’ view of the muse and that of the ancient Greeks‘ is that to the modern daemonicists trying to distinguish between perceiving the muse as an external, supernatural entity and trying to define it as a subconscious function of the mind is a useless exercise in semantics.  There are ways in which the mind works that we do not control or understand.  For example, dreaming is a common function of the mind, but no scientist to date has been able to conclusively explain and prove why we dream —  though hypotheses abound.

Daemonicists do not care to explain where the creative force comes from: only that it is outside of their control to invoke it. To them, this explains why some writers (me!) hear voices in their heads, or feel that they’re writing faster than they can think, as if something else is possessing their bodies. The state of flow is often downplayed by non-writers or writers who have never experienced it in its full throttle.  Skeptics of this state of flow refuse to believe that the intense trance-like condition described by those who have experienced it is meant to be taken literally.  They believe that those of us who experience the trance of flow are just exaggerating the experience or else making up an elaborate metaphors for it — after all, we are writers. Dressing up with words is what we do. To skeptics, flow is simply another way to describe intense concentration in one’s work.

It’s important to underline that Daemonicists do believe in habit and routine: they will all agree that the easiest way to scare off a muse is by neglecting to “show up,” that is, lazying, or giving in to anxiety and procrastination.

The reasons for it are different, however: the muse/the subconscious mind is coy, and needs coaxing and reassurance.  Like a vain diva, it must be courted, and flattered and lured out into the open with tact and slaving devotion.  Unlike the behaviorist, daemonicists believe that they do not have control over the outcome of their efforts.

In a nutshell: to a daemonicist, showing up to write every day is essential, but the outcome of that effort is completely or at least mostly detached from the personal will of the writer.

The daemonicist’s advice to those who suffer from writer’s block is to get themselves reacquainted with the daemon (genius or muse), through different methods, like meditation or dreaming or free association or simply inner listening. To Daemonicists, abandonment to the art or to the muse is the only appropriate behavior.  Let go of trying to be in control.

We can all pick our pet theory based on personal preferences or experiences, but as I’m preparing to compile a longer article, I have gathered some more opinions, not just from writers, but also from biologists, behaviorists (the scientists, not the writers) and neurobiologists.

To discuss everything that I discovered would take more time than is legitimate of a blog post, but here are some teasers you might find interesting to note.

1. Flow precedes the state of psychosis, an extreme form of mind immersion; block on the other hand is just to the right of normal mind awareness, only one small step removed from neurosis. 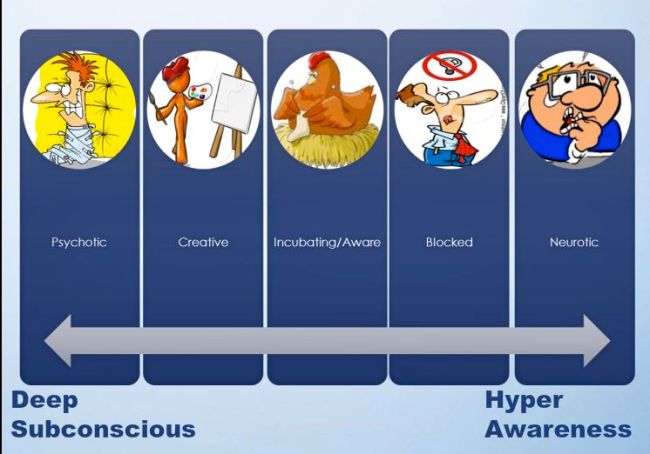 2. Both hypergraphia (impulse of unstoppable writing) and aphasia (inability to express oneself through writing) are or may be symptoms of damage to the brain’s frontal lobe. 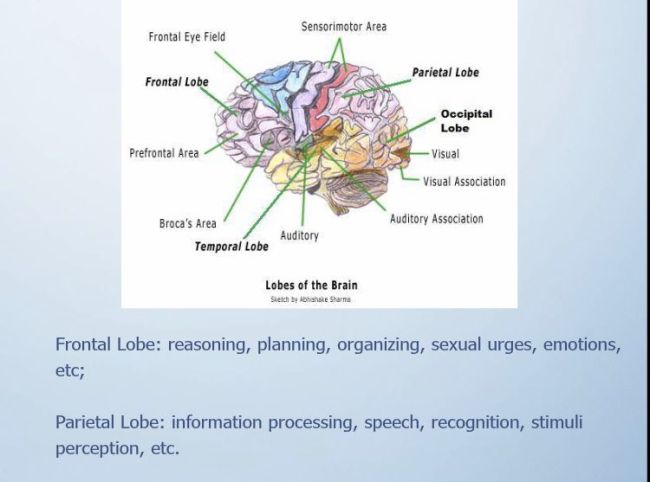 4.  Worry and anxiety are the enemies of flow, but so are boredom and apathy:

5. Neuroscientists studying the biology of behavior find that our habits are brain patterns fired repeatedly that “stick” to our processing because emotions act as a glue or cementing element to those brain patterns.  In this Ted Talk Dr. joe Dispenza demonstrates how our awareness and will power can shuffle and restructure our brain patterns:

Why this is relevant to writing is that habit is not just a question of action but a question of thought patterns created by our own emtions: we may be working ourselves into states of anxiety (which kills creativity) or alternative, of pleasure and playful challenge (which stimulates creativity) merely by associating the practice of sitting down to write with positive or negative thoughts.

In other words, we create our own reality, and that reality can be negative, a reality when every time we face a blank page and panic we reinforce our block, or a reality where every time we approach writing we feel elated, reinforcing a pattern of positive associations.

On the other end of the spectrum, and on the subject of Ted Talks, here is daemonicist Elizabeth Gilbert giving one of the most inspiring talks ever on the nature of inspiration and its effects on stress, anxiety and block.

So, what have we learned? The facts are the facts, but our interpretations of those facts can lead to interesting and diverse conclusions.  We cannot explain whether psychosis and religious experience are caused by external entities, but we do know that they manifest in specific areas of the brain.  We do not know whether our creativity is genetic or divinely inspired or developed through habit, but at least we can all agree on this: developing a habit of writing with a positive attitude about the action of writing will lead to positive results.