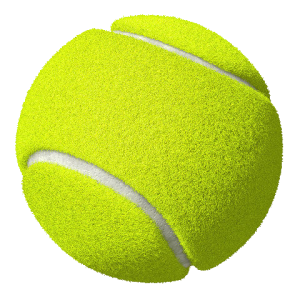 I’m severely astigmatic, which goes a long way in explaining those traumatic adolescent experiments in sports that my teachers put me through.  And I don’t mean just the usual traumatizing gym class so overplayed in teen movies, even though I had plenty of those teen-movie angst moments, like when my American peers thought to welcome my arrival from Italy by sticking a blood menstruation pad on my locker.

I mean everything, from the extra-curricular basketball team that my coach was so happy to accept me into due to my height (approximately 5’9″), never anticipating how much he’d come to regret it, to my fiasco in the country club tennis ladder where once, I managed to lose my penultimate position in a one-set match, where I managed a deuce in every game, and painful advantage points that went on and on and on until I lost every one of them, for a total of an 8-0 set.

My father was always the sports enthusiast, and I don’t think he ever quite gave up the hope that I would one day shed my groundhog persona and live up to the promise of my athletic frame. So he was always signing me up for something: the school’s mini olympics, the after school Judo club, extracurricular basketball, skiing lessons, sailing, and of course, tennis lessons.

All that I remember of my tennis lessons are this: an instructor standing at the net line with a basketful of balls, making me run from one side of the court to the other, while yelling:

“Keep your eyes on the ball.”

Now, I’ve had a number of instructors, male, female, young, oldish, middle aged, etc. as, in spite of my inability to accurately calculate the distance between the head of my racket and the spin of that bright, happy, marigold-colored tennis ball, tennis was and probably has always been my best sport.  (Which isn’t saying much, I promise you — or else, it’s saying too much).  Yet I’m pretty sure that I can’t remember a single word of what they taught me except that one thing.

I stopped taking tennis lessons when my father stopped paying for them: which was around the time I entered college.  And yet, I still think that was the best money my father ever spent on me.

It first started to dawn on me when I became tangled up with the workload of college, the unending reading lists and research papers of increasingly demanding professors piling up on my double major even as my cocaine-addicted roommate who spent most of her time at home making such oh-so-fun-practical jokes as leaving her toenails in the refrigerator would have her fits and pitches on the night before a test wailing out: “Oh, it’s so much pressure, I can’t take it!” so that I had to sneak up to the study room only so I could get  a few hour’s sleep on the coffee stained couch before my own tests.

The voice began to speak to me through my marathon reading of Poe’s collected short stories. It said, “Keep your eyes on the ball.”  All I had to do, as my tennis instructors demonstrated to me, volley after volley after volley, was to keep track of that ball, even as it seemed like I would never catch up to it, or worse, even when it looked like it was hurtling straight towards my nose.  Keep your eyes on the ball.  Even if it hits you in the teeth, damn it.  Make sure you see it.  Make sure you always know where it is, and where it’s headed.

I graduated college. And graduate school. And graduate school again.  I got married. Then my marriage became bad, and then there was a lot of drama. And as I tried to complete my first masters degree also as I was figuring out being on my own for the first time in my life at 34 years of age, still I heard that voice in my head: “Keep your eyes on the ball.”

I got jobs. I got many jobs.  I had jobs that in retrospect where maybe all kind of the same: they expected a whole lot out of me without giving me any resources or training to perform my tasks, and they were always, always, always pitifully paid.  For some reason, there seems to be some Universal law at work that says that when in a job situation there is almost no way to succeed, and the rewards are absolutely minimal, that’s when colleagues get really competitive, and drama shoots at you like a blender of chocolate pudding unhinging mid spin.

If my tennis instructors knew all the money I saved myself in therapy by their simple mantra, I think they might come back and demand a percentage of my savings (which, sadly, isn’t a whole lot).  If a colleague, or friend, or boss stabbed me in the back, or tried to involve me in a cabal against a third person, or annoyed me endlessly with the kind of mind-numbing, wire-scorching bureaucracy that so effectively demeans employees, in those quiet times after seething seemed pointless because there was no one in the room who cared, or when anything I would do would only seem to worsen a bad situation, I’d hear once again that voice reminding me: “keep your eyes on the ball.”

And now as I write, professionally, having therefore made a profession of things like rejections from editors, agents and readers, having made myself vulnerable to the elbowing, and rubbing, and hustling and the unfortunate blacklisting (which seems to be on the rise in the literary world) that comes naturally for taking the wrong side of an argument in this small, small world, I still find that the mantra that my tennis instructors taught me is the only thing that keeps me going and the only thing that makes sense.

That is, Laura, it really doesn’t matter that a certain group of editors will no longer accept your submissions because you once openly criticized one of the nastiest author attacks you have ever read published on any website, let alone on a website that is supposed to support emerging talent; it doesn’t really matter that you spend your time bleeding on a page for just the right amount of lyricism, for just that kind of subtlety that will permeate rather than waterboard, only to see your ass kicked by the likes of Stephanie Mayers; and it doesn’t matter that, as usual, you simply cannot aspire to much because there aren’t that many venues opened to women, let alone Italian American women who write about immigrants who are not political prisoners or natives of a country with whom the United States is currently at war; it doesn’t matter that some of the people you went to school with are now the #1 topic of conversation not only in literary circles but also in the case of at least one of them, in the world at large…

Because that is the only thing you CAN do.

Because everything else is just an excuse.

Keep. Your eyes. On that damned ball, Laura.