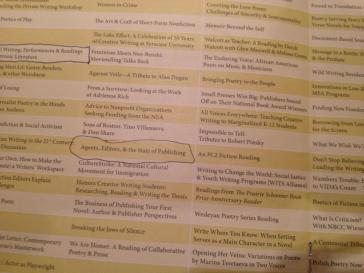 I know this is incredibly late, but here it is: my notes on this presentation given at the 2013 annual AWP conference held in Boston in February.  I had promised it months ago, but this is when I got to it.  I’m pretty sure the information is still relevant.

What background led them to the publishing:

Jennifer Joel: Worked at Goldman Saks. Wanted to try and understand what the business is all about. Admitted that this is a business where editors and agents aren’t exactly sure what gets stories sold.  She wanted to be involved in something creative and someone told her “You should be an agent” because “it’s all about selling.”

Esmund Harmsworth: He was a lawyer. He wanted to get away from legalese. He was always interested in books and great writing.

Chuck Adams: He came to love storytelling. He was a lawyer but he wanted to enjoy his job, and “except for financially, I have never regretted it..”  He used to type people’s papers in college.

What major changes had occurred in the industry during their careers as agents and editors:

Chuck Adams: used to be a small business. With Barnes &  Nobles coming into play, the small business increased by ten times as much.

Esmund Harmsworth: What changed is how people buy books. There was a seismic change.

Jennifer Joel: Is publishing going away? No. Good stories will be told, regardless of the changes in the media or medium.

What was the greatest challenge in their business.

Jennifer Joel: Getting through so many manuscripts.  As a business, it is bad at understanding/finding readers.

Esmund Harmsworth:  Finding more ways to get to people.

Jennifer Joel (added): The changes that we see now are opportunities.

How do they find their writers:

Chuck Adams: Through agents. Occasionally out of the slush piles.

Esmund Harmsworth: We look and look and look. Most are recommended, published something in a lit mag (yes, used the word mag)

Jofie Ferrari Adler: By fully being engaged in everything you do. Super hungry for people. Writes to people all the time.

What are some of the strikes that work against writers when they contact them:

Jennifer Joel: When someone writes to them they want to know why them. Did they see them representing the kind of work that they write? They want to see that in the letter.

Is Self Publishing a strike against the writer?

Esmund Harmsworth: it’s completely personal. They want something that they think is great. Is it commercial? Is there an audience? Do they like the story, etc.

Chuck Adams: Is not against self published if the writer sold enough copies. Mentioned one writer who sold 50,000 copies of two books from back of car.

Jofie Ferrari Adler: We hear about big successes but they are the real exception.

What is the worst case scenario: For example, is self-publishing doesn’t sell, is it a strike against you?

Chuck Adams: Mentions a novelist who had published three novels traditionally, left and went to Amazon and did not do so well. Now it’s noted all over the industry (meaning ugly). He rather responds to a voice. He wants to know that the writer knows who he/she is writing to.

Esmund Harris: From slush pile: we won’t read anything till one of the interns has read it.

Chuck Adams: It’s the buzz thing, like in Hollywood. Every book has to sell. Every book is returnable This causes considerable problems in marketing, etc.Every book must work out for them: mid list, backlist, must be sold

What do they think of the future of small independent bookstores?

[At this point, I stopped taking note of who said what and just wrote out the answer]:

Esmund Harmsworth: No. If you like it and know how to do it well, then have one.  Only if you’re good at building that platform.

Jennifer Joel: You should build a platform, some way to reach your readers.  Publishers love it and agents love it.  The ultimate goal is to be read as widely as possible.

Some in the audience expressed concern about interns reading from slush pile, a 22 year old being a judge of a starting career.

Esmnund Harmsworth: interns are filters but they don’t do my job.  He chooses them knowing their tastes and that he can trust them.  He says interns are for finding things that haven’t been represented well.

Once a book is acquired, how long or how many times does it take to edit?

Jofie Ferrari Adler: Sometimes it’s close from the start. Sometimes it takes many edits. The process is usually two months of concentrated line-editing.