>As the new year begins, I find myself hard at work promoting the book that’s coming out (February 1st! OMG!) and writing the book that my editor wants to see a hundred pages for (another OMG). So my To-Be-Read pile of books is nearing skyscraper proportions, and it’s not looking to be reduced anytime soon. Even when I’m too busy for reading, however, I always find time for working with my tarot cards.

This Christmas, I was excited to find a deck from my engineer hubby under the tree. Even better, it was a deck that managed to combine the awe and wonder of the material universe with the mystery and magic of the Tarot. I am having a great time reading about the creation of The Science Tarot, but an even better time working with the cards.

The key to making this combination of seemingly contradictory systems work is structure. Both science and tarot are highly organized, orderly collections of information. Both involve a progression that feels linear, but which is actually a series of cycles. The difference between the two is the main perspective lens — science uses logic and rationality (left brain stuff) and tarot uses intuition and subconscious processing (right brain stuff). That’s a bit reductive as an explanation, but as the Ace of Scalpels (Swords) points out, reductionism is a valid method for comprehension. It’s part of the seeker’s toolkit. It’s just not the ONLY part. 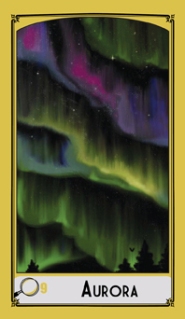 Like traditional tarot, the Science Tarot is broken into the major arcana and the minor arcana. Likewise, the minor arcana are broken up into four thematic suits, which each contain numbered cards ace through ten, plus four court cards. The difference is in the nomenclature. For example, in traditional tarot, these suits are called Wands (Energy), Cups (Emotion), Swords (Intellect) and Pentacles (Physicality). The Science Tarot uses Bunsen Burners (Creation — astronomy and cosmology), Beakers (Integration — biology and ecology), Scalpels (Observation — physics and math) and Magnifying Glass (Exchange — geology and chemistry).
For example, the Nine of Pentacles (represent in this deck by the Magnifying Glass) is Aurora, the stream of energized particles accelerating along Earth’s magnetic lines that cast off excited electrons in the upper atmosphere, creating  the mythic glow of the Northern Lights.This card in both decks represents the release of outdated things and ideas, leaving only the refined and cultivated newness behind. This process often entails sacrifice, but it is worth it for the end result.

Instead of Pages, Knights, Queens, and Kings, the Science Tarot present Explorers, Innovators, Storytellers, and Visionaries. For example, Carl Sagan is the Queen of Wands, the Storyteller whose intelligence and empathy welcomed others into scientific discovery. 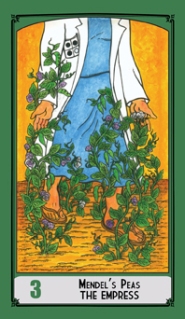 The Major Arcana tells famous stories from science, or as the deck describes it, “shared experiences and moments of transformation.” In traditional decks, these are the cards of grand archetypal experiences, the “big stuff” we all discover as we grow and evolve as human beings. For example, the Empress in traditional decks is represented here as Mendel’s Peas. But both cards represent nurturing attendance and natural processes, a time for growth, patience and gestation.

By honoring the connection that science and myth share — the wonder and awe that occur as we try to explain this universe and who we are within it — the Science Tarot creates a bridge for skeptics who might dismiss the power of this ancient divination tool. Plus, it’s just gorgeous, with each five sections rendered by a different artist, providing continuity within each suit and creating a tapestry of lush imagery overall.

I highly recommend this deck for both tarot beginners and more experienced readers. And it’s especially useful for introducing someone whose maybe a little weirded out by tarot’s “woo-woo” reputation to the power of their own subconscious. I’d pair it with a shot of high-end vodka, straight up — a very utilitarian way to get a warm fuzzy feeling,

To read more about the Science Tarot — or to order it — visit the website: http://www.sciencetarot.com/cards.html