by Catriona Iams, Lady of Harley, and writer of historical fiction and historical romance
As many of my friends know, I ‘ride bitch.’ As of September, I’m a ‘lady rider.’ I think I’ll still ride bitch from time-to-time, after all, it’s an intimate way to travel, and I’m new to this. If it’s dark and rainy, I drive my cage to meet my friends for dinner. And I’m laughed at: “Wimp!”

Oh … excuse my biker vernacular. ‘Ride bitch’ means to ride passenger on a motorcycle. Lady Rider is a woman who rides her own motorcycle. Cage is a car, and if you get out on the road on a motorcycle, you’ll know why a car is called a cage.

“Harley-Davidson, Life Begins When You Get One”

For me, this marketing slogan is partly true. My babies are grown, my first born 20, and my baby girl is 16. Need I say more? The only time I can get my daughter to go anywhere with me is if there’s something in it for her, like a pair of UGG boots. When my son went away to college I went into grieving mode. I knew I’d miss him, but I had no idea that the process would feel more like mourning than a tough adjustment. And yet feeling that way seemed so wrong. How could he be away having the time of his life while I was feeling like someone close to me had died? My mood did improve, and relatively quickly, the grieving process short, since no one had really died.

So, one Summer weekend My Mr. Darcy (MMD) and I were potting flowers for the yard, havign the usual seasonal discussions, such as how much more use can we get from our gas grille and current patio furniture, and how lucky we were to be able to afford heating oil through the winter (I might just be the only non-Southerner, here), and how often, if ever, we should check our ravaged 401k. Frankly, it occurred to me suddenly that I was sick-and-tired of sitting home waiting to grow old. Who am I kidding … getting old.

My brother-in-law has a Harley-Davidson, a big HOG, and on the weekends he wears a leather vest with patches and a doo-rag on his head. During the week he’s the guy in a pair of khakis and a polo shirt who heads-up a purchasing department for a large company. So me thinks: A Harley? 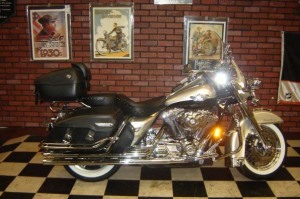 I don’t know what possessed me, but I said to MMD: “Let’s go to the Harley-Davidson dealership and just look around.” Well, that’s like saying to the ultimate sports fan: “Do you think we should buy tickets for a few of the Phillies games?” That’s right, the baseball fan, with little encouragement, would buy season tickets. My husband had me at the Harley-Davidson dealership within the hour. We owned a big, fat HOG within three days. Here it is: 2003 Road King Classic, 100th Anniversary Edition. All silver and shiny and clad in chrome.

Two helmets, two leather jackets, and two hard-core motorcycle boots later and we were set to ride. Well, I was anyway. My husband hadn’t ridden a motorcycle for many years, and then it was smaller, lighter, metric bikes. He had to get used to balancing the weight of a Harley-Davidson. And once he’d mastered that, he had to get used to balancing the bike with me on the back. I had to cool my boots for three weeks until he felt confident that he could ride with me as passenger. 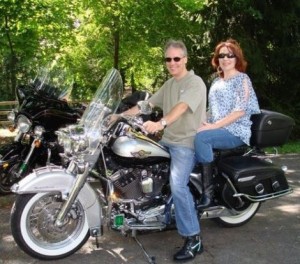 This was just the “posing” picture. I hadn’t actually been on the back with the motor running yet.

For about a month we rode to various parks and friends’ houses and then wondered where we could go next. Lo and behold, an envelope arrived in the mail from National Harley Owners Group (H.O.G.). The dealership where we’d purchased the bike paid for a one year membership for us. I logged on and discovered road maps with pre-planned, downloadable routes; an online store; message boards; enthusiast journals; and most importantly, a link to a local H.O.G. chapter. There was one in our county that met monthly.

MMD and I went to the meeting held in a local firehouse’s banquet hall. About fifteen round tables (sans the linens that usually adorn them for baby showers and weddings, were spaced about the room) and for the most part, full. Leather clad men, and some women, sat around, drinking coffee and eating cake. Yes, eating cake. Bikers eat cake. They like ice cream, too.

MMD and I did not know where we fit-in, so we chose a table with two open seats. There, we met the Kauffman’s. And the Bittner’s. And the Nicely’s. Mrs. Kauffman is in my age group, pretty curly hair, silver from the day she was 20, and a graphic artist with her own business. She rides her own motorcycle. Mr. Kauffman is a talented guitarist and vocalist. Mr. Bittner works in IT at an ivy-league university, and Mrs. Bittner rides bitch with her Bichon Frise in a customized pet carrier on the back. Mr. Nicely is retired airforce and Mrs. Nicely is a witch. The good kind. She just got her mc license.

Since then, we’ve learned that local H.O.G. chapters are populated with judges, the ex-convicts they’d convicted, volunteer firemen, accountants, and romance writers, like myself. Though I’m the only one in my chapter, and does it make for fun conversation. We ride for charity, and we ride for fun. Our club motto: ‘Live to Ride, Ride to Eat’.

On the back of MMD’s hog, with our group, we travelled to Washington, DC for “Rolling Thunder,” to support a chapter by the same name’s efforts to keep focus on POW/MIA. We spent the weekend touring museums, eating at fine dining establishments, sightseeing, and memorializing with other “bikers.” We’ve been to Gettysburg and toured the battlefield on our chrome pony, and riding those old horse trails, paved now, was just like seeing the roadsides and rolling hills and farmhouses the way those cavalrymen would have seen it in 1863, I’m convinced.

There’s nothing like seeing the country (indeed, our world) on the back of a motorcycle. We’ve met International H.O.G. members in Sweden and Finland, Scotland and Belfast, Ireland. Well, maybe being a rider, instead of passenger, might be better. I’m soon to find out. I just passed the state Motorcycle Safety Foundation course and then the road test and ‘M’ was added to my license, meaning I am a licensed motorcyclist. I bought a bike!

What’s it like? Riding passenger (or riding bitch in the motocycle enthusiast’s vernacular) is very nice on the back of a big Harley hog. They are smooth, and not as loud when you’re on one as when you’re beside them on the highway. You see everything in panorama. A storm off in the distance looks like a shimmering gray horizon, from which bolts of lightning charge up from the ground and meet bolts that are fired down from above. At least that’s the way it looks. The smell of ozone is crisp. Being caught in the rain is really quite a pleasure. The aerodynamics of the bike cause you to ride with a flow of wind over you, so you feel only a cool mist. On a hot summer day it’s delightful. When riding in a car, you are looking out a window, even if the window is open. It’s not a full view by any stretch. Inside the car you smell leather, pleather or carpet and plastic. On the back of a motorcycle you smell freshly cut grass, smoke from a chimney, honeysuckle, lilac and anything that’s about. Riding in a group over and through historic covered bridges is sensational, your senses seduced by the sound of wheels on thick wood planks, sharp edges of sunlight pouring in through the slats of the bridge, the smell of the dry cedar roof rafters, and the echo of the pipes as riders throttle up. These small thrills remind all riders of the simple and pleasantly overwhelming delights of childhood. 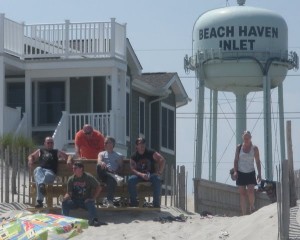 When you join a club, you could be riding with 20 bikers or more, and so you ride in formation. Have you ever ridden behind a motorcycle “gang” and seen them hold up their left hand and make the sign of the devil’s horns? I have, and thought it some diabolical symbol of unity among the demons on wheels. It means: resume staggered formation in two rows. One finger means single file, narrow road ahead. In this pack, many bikers have headsets, complicated systems that make it possible to listen to music on your iPhone or MP3 player, answer your cell phone, and communicate with the others riding in your formation on a designated channel. So the commaraderie is wonderful. We laugh at the heady scent of cow manure, share the oohs and ahhs as we see wild turkeys, deer in the field, llamas by a fence, vineyards we pass, and, living so close to the shoreline, the smell of the ocean and the fun to be had along the roadways to the seashore.

That’s what it’s like to ride passenger, and I’m sure it will be that way again for me as a Rider. A rider is one who is driving the motorcycle. Right now, it’s not quite the idyllic scenery of roaring loudly through the bucolic countryside. It’s so much more physical. I was sore after my first day of riding. I didn’t go very far, clocking about twelve miles. My arms, shoulders, forearms and calves were sore. The clutch is within reach of my left hand, the front brake within reach of my right hand. Rear brake, right foot. Shift lever, left foot. WeightWatchers credits you points for riding a motocycle. “What gear am I in?” (out of 5) is a constant refrain I repeat to myself. “Stop sign ahead, slow down. Use rear brake first. Can’t go up hill in neutral.” It’s a series of isometric exercises, using motor skills, and some coordination I didn’t think I was capable of. But I’ve accomplished something major, at a time when I thought the most major thing I could do is sell a manuscript, or wait for one of my children to provide me grandchildren. Riding a motorcycle compares, I think.

The first time I picked my feet up and clutched, shifted gears, turned a corner and then sped-up to follow MMD through the winding roads of my neighborhood felt great. I hope to be comfortable enough with the process to ride to the Pennsylvania State Rally in Summer 2011 to Gettysburg, PA, with my fellow chapter members, both male and female, and meet with other members of the Ladies of Harley (L.O.H.), a sub-chapter of National H.O.G. So, yes, I am truly a Lady of Harley. Here’s our Crest:

And here’s what a Lady of Harley looks like on a bike in Pennsylvania in Autumn: 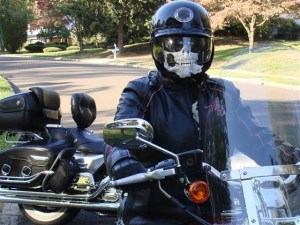 Why all the leather and chains and skulls? It’s positively medieval. And I love it! And I love old castles, too. Both motorcycles and castle ruins inspire my muse. Here’s me straddling a motorcycle:

And here’s me sitting like a lady on the causeway of Urquhart Castle’s main gate, and the inspiration for my work-in-progess: HIGHLAND PRINCESS. 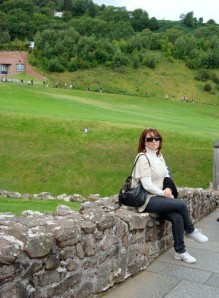